A Happy Birthday All Around 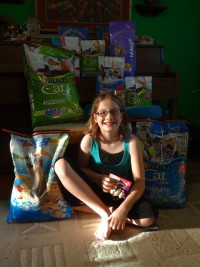 Sybilla and her mom, Beth, love to visit the cats at ACDC’s Adoption Center at the Marple Crossroads PetSmart. But Sybilla is allergic to cats so they cannot bring one home. The pair like to think of the cats at the center as “their” cats. “Often times it is hard to leave them behind at the store,” Beth says.

When Sybilla turned 11 this January, she asked for cat food from her guests to donate to ACDC. And they really came through! This isn’t the first time she’s made such a request. Last year, her guests generously provided supplies for both cats and dogs. After finding out most of ACDC’s foster animals are cats, Sybilla and her mother decided to focus on them. Beth explains, “This is one way she can help all the wonderful cats we see at Petsmart.”

Happy Birthday, Sybilla, from all of us at ACDC! Many thanks to you and your guests.

Back By Popular Demand! BINGO Night!

The Animal Coalition of Delaware County (ACDC) will host its third Bingo Night event on Saturday, May 7th at the Redwood Community Center (280 6th Street) in Brookhaven, Pa. Doors will open at 5:00 p.m. and early arrival is suggested as space is limited. Up to $700 is cash prizes will be awarded throughout the evening in addition to raffle prizes from such supportive Delaware County business as Local Home and Gifts, W.F. Beardsley, Fergy’s Hair Salon, Oasis Fun Center, Seven Stones Café, Earth and State, Pinocchio’s, Pet Pro Nanny, and Stoney Creek Veterinary. All proceeds from this family-fun event will go towards helping homeless animals.

There will be 20 Bingo games played throughout the evening with an entry fee of $15 that includes one Bingo book and two raffle tickets. Additional Bingo books can be purchased for $5 and additional raffle tickets for $1 each or 15 for $10. Snacks and beverages will also be available for purchase; again with proceeds going directly to helping the animals in ACDC’s care find loving, permanent homes.

By hosting Bingo Night and other community fundraisers, ACDC is able to provide much-needed veterinary care to homeless animals that are waiting to find their “Fur-Ever” homes. This includes FIV-testing, spay or neutering (if old enough), vaccinations, and more. This coupled with the organization’s more personal approach of placing animals in foster care rather than in a shelter, ensures that all animals adopted through ACDC are as happy and healthy as possible as they begin their lives with their adoptive families. 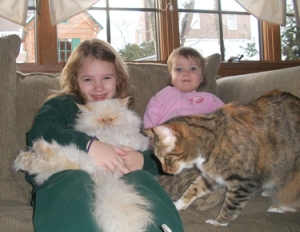 It has been said that cats have an innate ability to always land on their feet when they fall, no matter the height or angle. Here at Animal Coalition of Delaware County, we can proudly say that we have proven that to be a true statement! Don’t worry, we haven’t gone crazy and and started tossing cats out the window. We like to think that all cats will find a furever home, regardless of the circumstances. Mickey, a Himalayan rescued by ACDC, is such a cat. He came from a great home where he was well cared for by a woman who, due to illness, sadly became unable to care for herself or Mickey very well. As much as we all would hate to give up our own pets, sometimes misfortune happens and we are forced to make hard choices. The wonderful upside to Mickey’s story is that his owner loved him so much that she called ACDC and asked us to place him in a new home.   There are many options for rehoming a cat-some less savory than others, but by calling us, Mickey’s owner knew that Mickey would be cared for and loved until he found his next furever home, no matter how long it took. We are delighted she chose to share her adorable, beloved Mickey with us. END_OF_DOCUMENT_TOKEN_TO_BE_REPLACED

My Cat Has What?

Herpes. Ever since high school health class that word has prompted “ewws” and “gross!” in the minds of many. So when our vet informed me that our cat Coal has herpes, I thought “ewww” before even learning what feline herpes really is. Turns out a herpes virus means many things among many species. END_OF_DOCUMENT_TOKEN_TO_BE_REPLACED

My Passion: Why I Volunteer 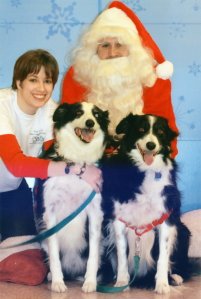 I am a 24-year old woman, a college graduate, with two careers. Given the crumbled state of this economy, you probably would think that those two careers would be soap operas and newspaper cartoons. Much to the relief of my parents, you would be wrong. By day, I am a merchandiser, stocking and arranging things for other people to buy, but by night, weekend, and every minute in between, I attempt to be a superhero. And I am not alone. For you see, I rescue animals.

It all started last fall when I got tired of being underemployed and decided to “put my money where my mouth was,” so to speak. I went onto the internet to find a volunteer organization that would allow me to put my talents and skills to use. I looked for groups having something to do with animals because I realized that I have so much love to give and not enough creatures to receive it! The Animal Coalition of Delaware County (ACDC) popped up right away.

As soon as I applied to volunteer and went to the orientation meeting, I realized that these were powerful people. ACDC is entirely run by volunteers, even the Board of Directors, and while there is a hierarchy, it isn’t all that strict. Volunteers are allowed to do as much as they want. I initially signed up to do outreach events, and found myself rearranging and folding the merchandise, to the delight of our then-President. However, I still didn’t feel like I was doing enough.

I found the ACDC fan page one evening while I was browsing Facebook, an activity that became a business for many when I was in college. It is the most popular social networking site on the internet right now, and as such, has become a superb way to reach people to share information about events, groups, companies, etc. I messaged the current administrator about working on it. Even though I had only officially been with the group for a few months and had barely participated in activities, she agreed to let me.

I have had so much fun and have been able to network with so many other rescuers across the globe because of ACDC’s fan page! We have even gained a new foster mom who found us through Facebook.

The best thing about working with ACDC (besides all of our cuddly, gorgeous animals) is definitely the people. Everyone is so dedicated to rescuing animals in need and finding them their “purrfect” homes. They may be accountants, designers, marketers or more by day, but their spare time is devoted to the care and placement of the animals.

They spend their nights and weekends driving all over the tri-state area to transport animals between vets’ offices, foster homes, shelters, and more; working for hours to get the perfect picture of the bunny who won’t hold still for the website photo; dreaming up and sketching out ways to raise more money so that we can give medical care to more animals; and holding paws as heartworm treatments are given.

Oh, and a lot of our volunteers have families, too. I don’t know how everyone gets everything accomplished. I like to think there are little furry angels watching over us. There’s nothing like the joyful feeling of saving an animal’s life and watching them change someone else’s. My only hope is that someday the number of our successes equals the number of animals in need.